I actually planned my entire trip around being in New Orleans for Mardi Gras. It was an event I wanted to experience and happening around the time I could begin, so why not make it an anchor. I spent 4 nights in the French Quarter - arriving the day before Mardi Gras and staying two days after. That meant I could experience both sides of the city in one trip. 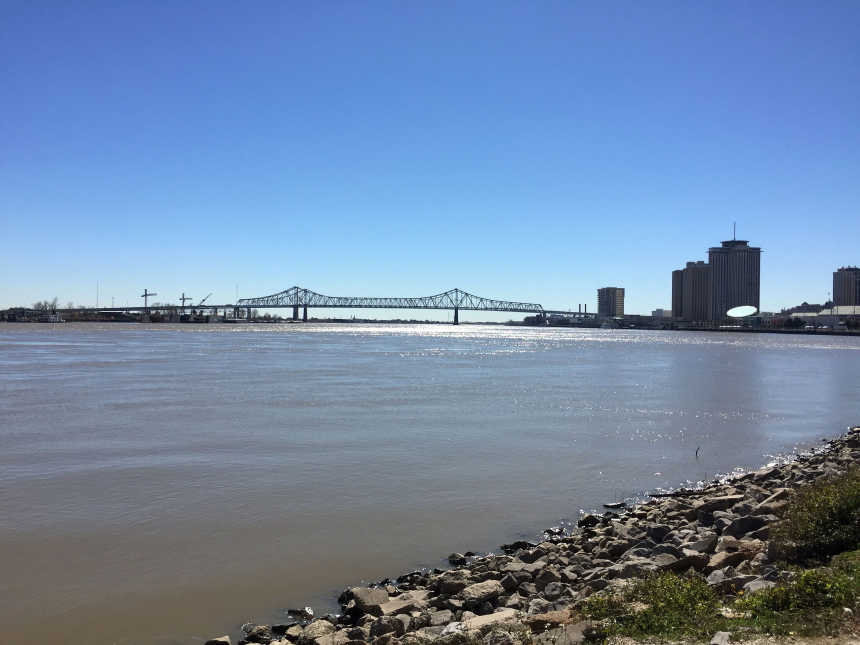 The French Quarter is definitely the most interesting part of the city with its old buildings and feel. I stayed at the only hostel in the district and everything really interesting was a short walk away. New Orleans has a unique character: grungy, chaotic, apathetic. It seems like a good part of the city is in some sort of disrepair. About half of the pedestrian crossing signals don’t work and most of the streets are in terrible condition or under construction. Things are left to their own devices. Even the cemeteries seem unkempt despite requiring fees from families who have loved ones buried there. The urine odor isn’t up to San Francisco levels, but it’s making an effort to compete. On top of this, the locals just don’t seem to care much about changing it.

I have to make a separate section just to explain the phenomenon of beads. The city has a number of parades scheduled leading up to the night of Mardi Gras. The floats in the parades consist mostly of people throwing beads and other junk to people in the crowd. You quickly get obsessed with collecting as much of this junk with you do by trying to get the attention of people on the floats. By the end of the parade, they are literally throwing entire plastic bags of beads just to get rid of them. There are other floats preceding these which have other objectives, like this one with a DJ trying to get the word out by throwing burned CDs:

The video doesn’t show how dangerous this was but people were getting hit in the face with discs thrown like frisbees, so make sure you wear some sunglasses. I attended the Zulu parade, which I was told is the best one. It took place on Tuesday (Mardi Gras) morning starting at 8am but went on at least until 1pm (we left before it ended). The main floats are pulled by a bored looking fellow on a tractor and have rather strange themes. 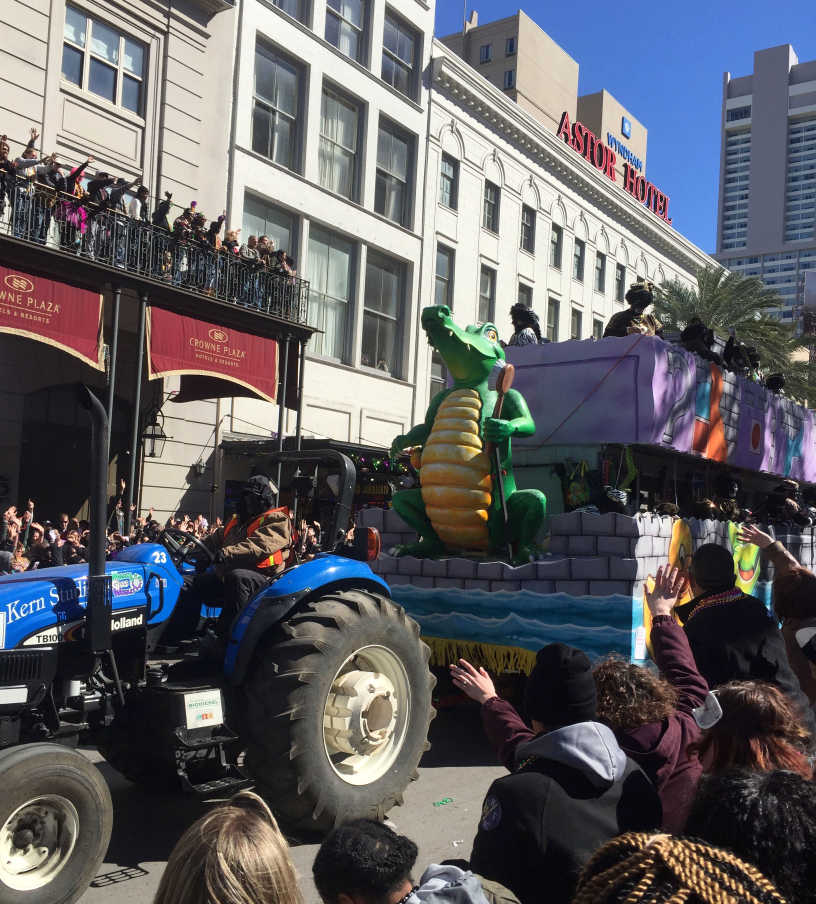 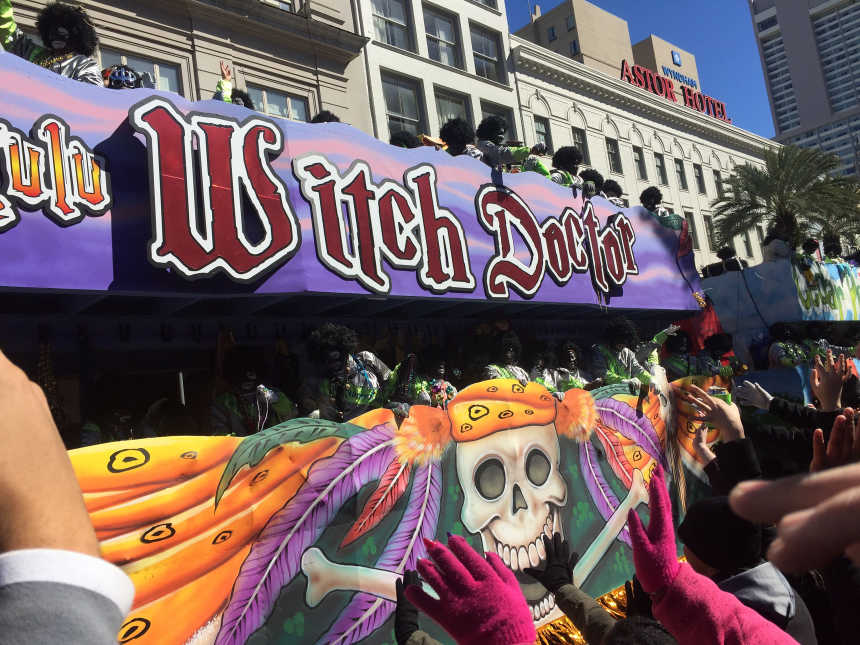 You end up leaving with a ton of junk, wondering what you’re going to do with it all. I tried wearing all of the beads we got at once: 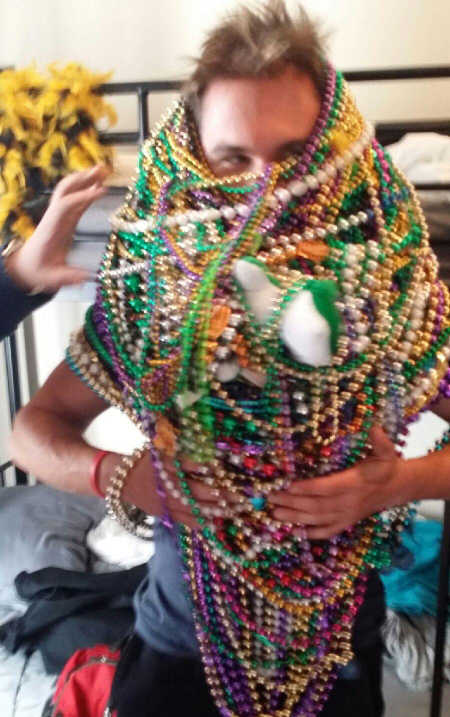 That night we headed out to Bourbon street, the epicenter of Mardi Gras. The street is basically packed with thousands of people milling about. There are many balconies, which have people throwing beads to people below. Some places allow you to get out on them so you can see the action from above:

It’s a great people watching experience. There were many police but they generally let people get away with behavior that would get you arrested elsewhere. Other than that, it’s pretty much what you would expect from a ton of drunk people in one place. The strange thing is that it started clearing out at midnight. I think the locals were tired of the month-long celebration leading up to Tuesday night.

After Mardi Gras, Bourbon st. is much more tame. There will still be people out at night, but during the day it’s more or less like any other NOLA street. This was a good time to check out local establishments recommended by the hostel staff. This is one of the more popular Jazz clubs, The Spotted Cat: 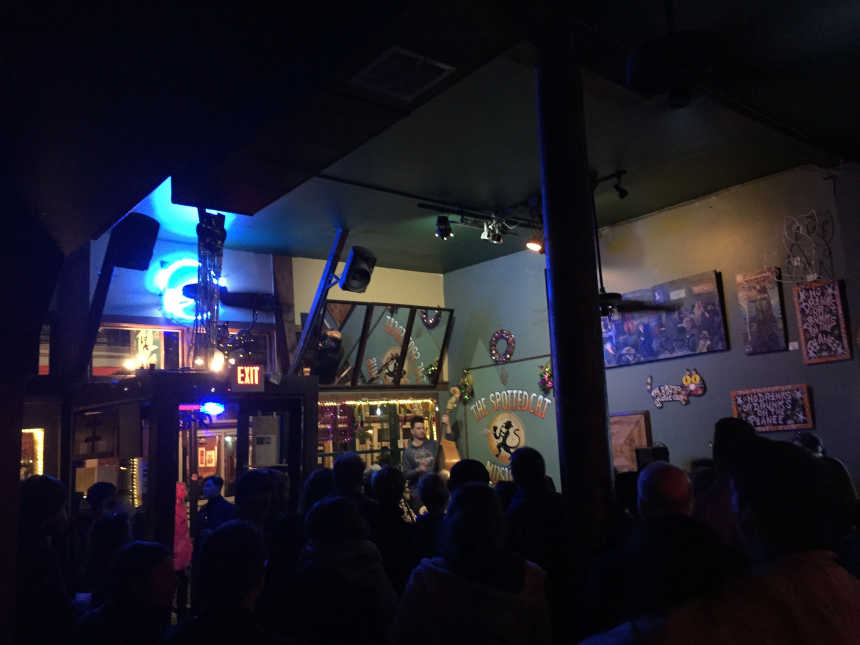 I also had a Tarot reading done in Jackson Square. Turns out I’m getting married within 6 months! Though, I think my mom called her and primed her answers beforehand.